2017/05/09
There are three main ways to treat the aluminum profile surface. Here we are going to introduce six major advantages of powder coating. Aluminum surface usually will be treated through three kinds: anodizing, electrophoretic coating and powder coating.
The advantages of powder coating
the process is relatively simple, mainly due to the improvement of accuracy of the major equipments automatic during the production process . Effectively reducing the difficulty of process operations while greatly reducing auxiliary equipment  high yield, usually under proper measures, to maximize the control of non-conforming products.
Reducing energy consumption, in the general anodizing, electrophoretic coating of the production process, electricity consumption is quite large, especially in the oxidation process. Rectifier output current can reach between 8000 ~ 11000A, the voltage between 15 ~ 17.5V. Coupled with the heat of the machine itself, need to keep circulating water for cooling, tons of power consumption is often around 1000 degrees.
The water, air pollution levels reduced, the quit of sulfuric acid and other liquid organic solvents reduces water and air pollution. At the same time, it reduce the production costs for it improve the competitive strength of aluminum as an environmental friendly products. 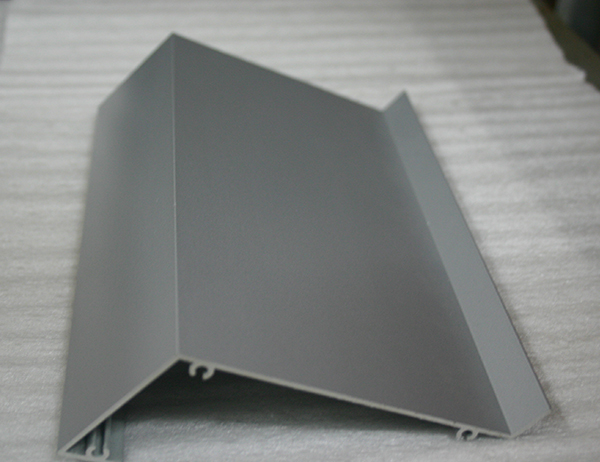 Chinese aluminum profiles supplier have significantly reduced the labor intensity due to the use of automated assembly line operations, feeding methods and the simplified of fixture, which increased production efficiency and reduced the labor intensity.
high technology components and the deployment of different colors
coating of some physical indicators, such as hardness, wear resistance, has significantly improved compared with other surface treatment film, which can effectively extend the life of aluminum.
Powder coating is used in powder spraying, electrostatic spraying is used technically, under the influence of accelerated wind, the powder particles will contact both positive charge and negative charge of profile when it spray out the gun body, resulting electrostatic adsorption. After high temperature curing, it will be solidified and the adsorption strength will be added to prevent the film off.
The process itself is equipped with very high technology components and the deployment of different colors, resulting in different decorative effect colors. More in line with the needs of interior decoration, but also in line with the aluminum profile manufacturers  construction in the construction industry indoor development trend. In particular, the combination of sprayed profiles and thermal break bridges make it more fashionable, which makes the powder sprayed profiles have more room of development .